After almost 20 years, I’m honored to have been asked back to NASA. This time for the Space Shuttle launch scheduled November 1, 2010, as part of #NASATweetup.

Over two days I’ll get tours and the opportunity to speak with shuttle technicians, engineers, astronauts, and managers as well as to watch the launch from the press area. Of course I’ll share on Twitter, Facebook and blog while I’m there.

This is the last scheduled mission for Space Shuttle Discovery, and the Shuttle program is scheduled to end with the final Endeavor mission, STS-134 in February, 2011. [Update: the new budget approved recently adds one last mission in June for Atlantis.] My friends Rusty Hodge of SOMA-FM Mission Control and Scott Beale of Laughing Squid have been to invited to past #NASAtweetups.

The last time I was to KSC and the Cape was as an engineer. Yes, on some level I can claim the title rocket scientist (without even resorting to the model rockets I built and launched as a child)… At the time, I worked for Commodore-Amiga as a software engineer in the operating system and networking group. I went to meet with the NASA engineers who used the Amiga for real time telemetry and video processing out of Hanger AE. While there I visited mission control for a live Delta countdown, and later watched from Cocoa Beach Pier the night launch of its classified payload.

Launch was stunning experience even from that distance with a smaller vehicle. It is going to be amazing to see the Shuttle launch from up close, so I know I don’t want to miss this opportunity. To this day, I still kick myself that I didn’t immediately take advantage of an offer I once had to stop by Huntsville anytime and don an astronaut suit to dive in the tank used to simulate shuttle EVA. Maybe if I get lucky that chance will come around again.

Here’s a badge from my past visit to Hanger AE: 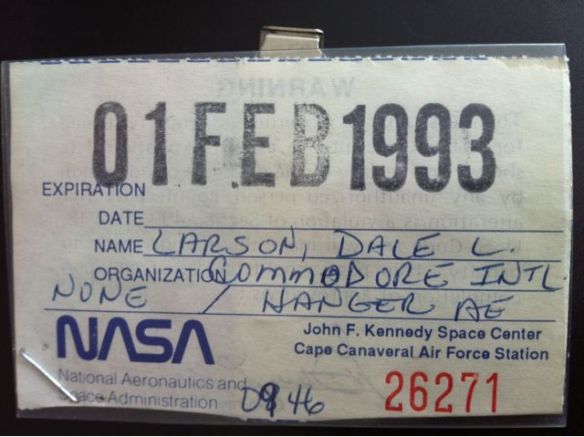